Just added to your cart

Adding product to your cart

iRig Keys PRO gives you the best of both worlds. It’s a super-compact, bus-powered, “plug and play” MIDI controller that you can use anytime and anywhere. Yet despite it’s small footprint, if offers full-size, velocity-sensitive keys, allowing for a realistic playing feel.

With its 37-key (3-octave) keyboard, you can play legitimate two-handed parts. What’s more, it has loads of pro performance features that will make your creativity come alive.
Use it and its included software to plug in and jam with your iOS or Android device or Mac/PC. 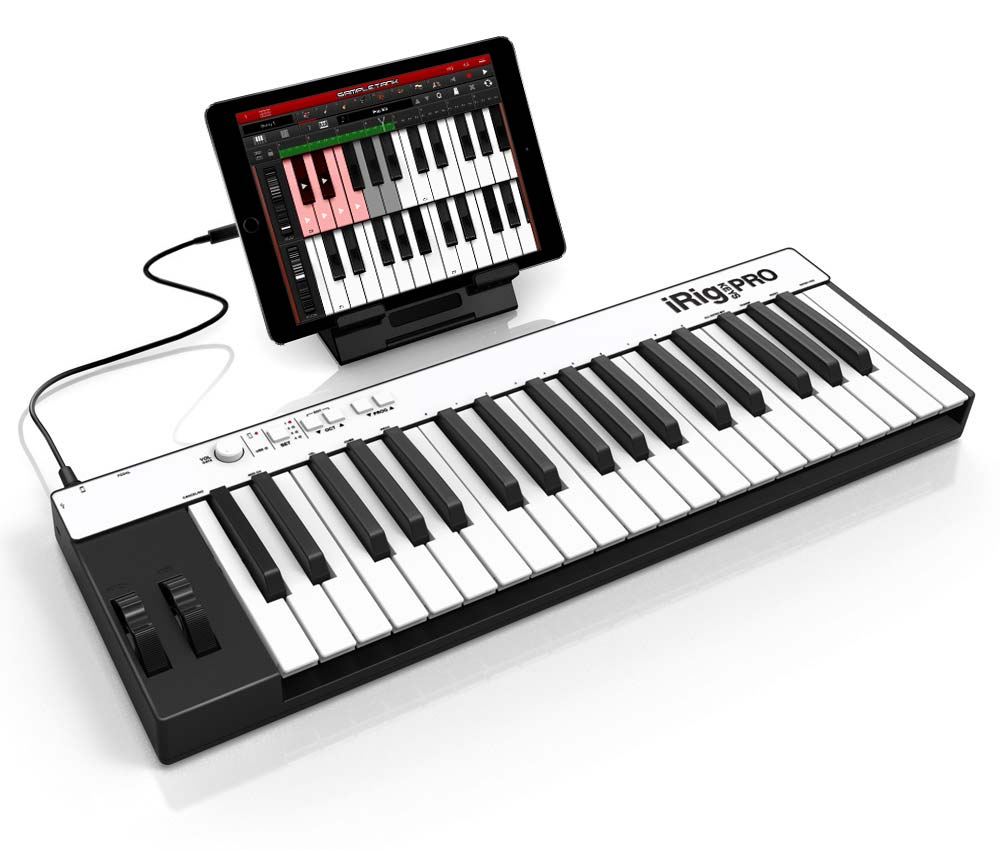 iRig Keys PRO is equally useful as a portable MIDI keyboard or studio controller, and a perfect solution if you want a single keyboard to use in both situations. 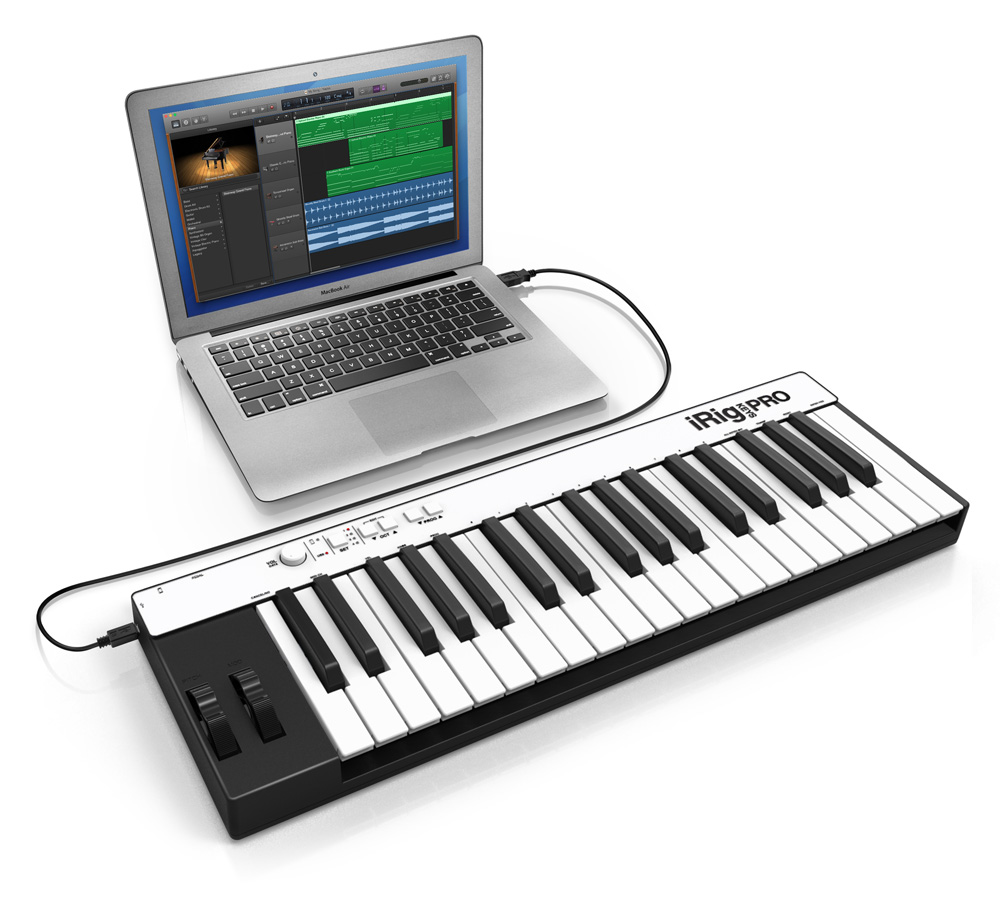 Connect it to your Mac or PC for use with your DAW and computer-based software instruments, and easily carry it around with you to use whenever and wherever you want with your iPhone, iPad, iPod touch or Android device.

For maximum playing comfort and versatility, iRig Keys PRO includes modulation and pitch-bend wheels. It’s also equipped with an expansion jack, allowing you to connect a sustain pedal for an even more realistic piano playing experience, or an expression pedal for controlling continuous parameters like volume, tremolo, vibrato, rotary speaker speed and more (pedals not included).

iRig Keys PRO features an easy-to-use control panel that gives you 5 backlit soft-touch buttons and one Volume/Data knob. You will find Program and Octave up/down buttons plus a Set button that allows you to store up to 4 different setups for the complete iRig Keys PRO configuration.

All these parameters can be stored in Sets using the Set button and recalled in a snap, to allow for quick sound switching and easy control of various instruments or apps on the fly.

iRig Keys PRO is the most compact full-sized-key MIDI controller on the market – up to 30% smaller than other full size MIDI keyboard controllers.

In addition to being the smallest in its class, iRig Keys PRO is also the lightest. In fact, it’s 20% lighter than it’s lightest competitor, and almost 45% lighter than the average weight of its 11 closest competitors. So not only is iRig Keys PRO significantly smaller than any other keyboard of its type, it’s also a whole lot lighter. When it comes to portability, there’s no comparison. iRig Keys PRO is the hands-down winner. iRig Keys PRO is small and light enough to take with you almost anywhere. Because it’s bus powered — meaning it gets its power from the device it’s plugged into (iOS, Android, Mac or PC) — you don’t have to limit your music making to places where you have access AC power. Jam, produce or practice at the beach or in the woods, out in a field or at the bus stop — anywhere, really. And when you’re somewhere where there is AC power, you have the option of powering iRig Keys PRO through it’s USB port.

When we say iRig Keys PRO is “plug and play,” we’re not kidding around. Because it comes with both Lightning and OTG to Micro-USB cables, you can plug it in right out of the box, no matter whether you have an iPhone, iPad or Android device. The included USB cable lets you connect to your laptop or desktop Mac or PC. And if you want to connect to an older iOS device, all you have to do is pick up an optional 30-pin cable.

What’s more, iRig Keys PRO is Core MIDI compatible, so you don’t need to download drivers or any helper software or apps, just plug in and go. It couldn’t be easier.

If you purchased an iRig Keys with Lightning or an iRig Keys PRO starting October 1, 2015, you are eligible to receive a free OTG to Micro-USB cable, if one is not included.
Contact IK Support to request your free cable. Make sure to register the iRig Keys with Lightning or iRig Keys PRO and provide proof of purchase. Please allow 4-6 weeks for processing and shipment. Also, all requests must be made within 60 days of purchase.

To get you started right away, iRig Keys Pro comes with some pretty powerful software that can be downloaded and played with immediately. 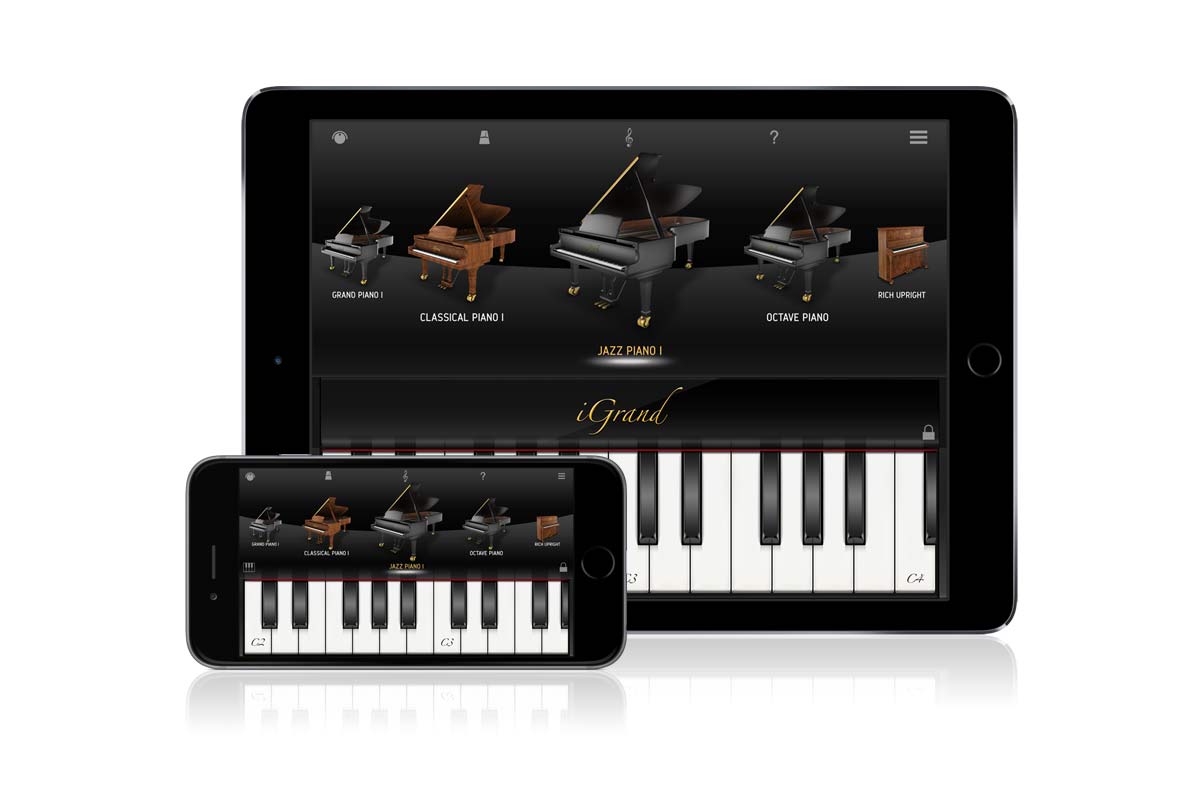 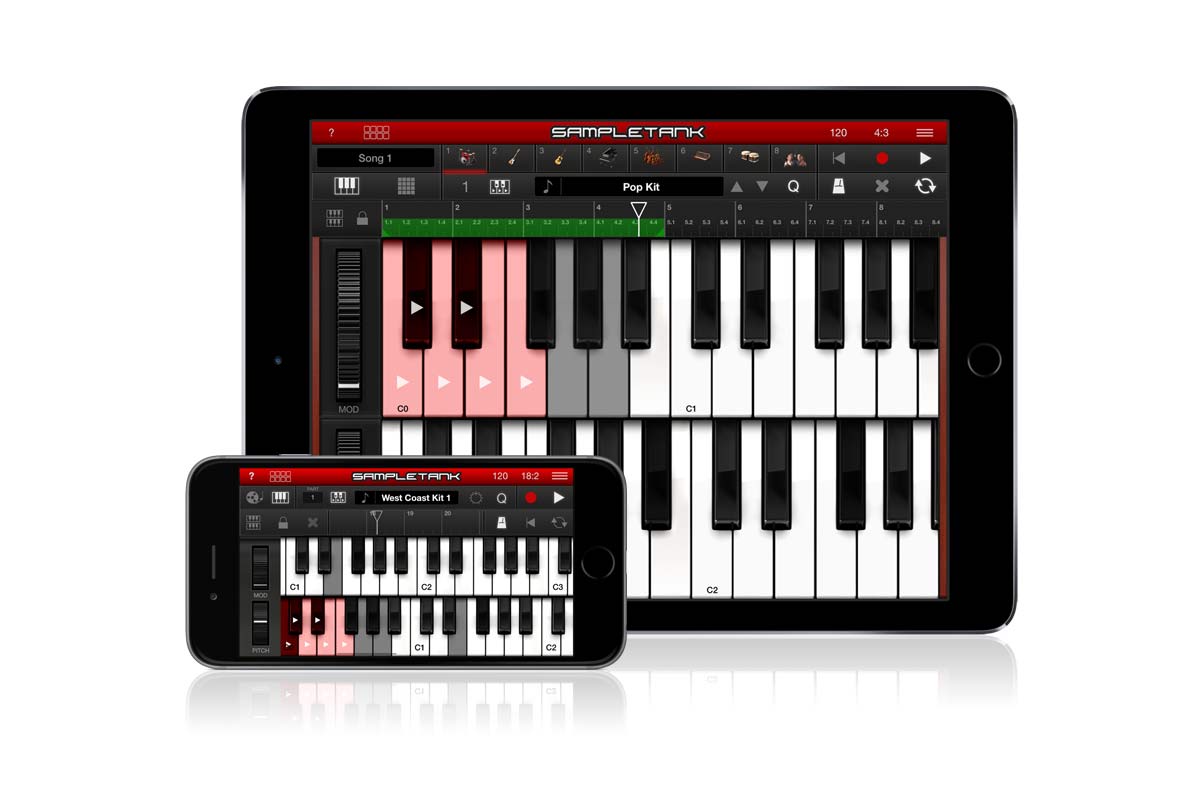 iGrand Piano FREE for iPhone and iPad, the concert-quality piano app with 2 world-class, multi-velocity stereo grand and upright piano instruments, expandable library of 15 additional studio-grade instruments instantly available via in-app purchase, MIDI Recorder with overdub capability , and much more (to be downloaded from the App Store).

SampleTank for iPhone and iPad FREE, the virtual sound module including a complete selection of acoustic, electric and electronic instruments and patterns, unlocking 48 bonus instruments in addition of the 23 included with the free version (to be downloaded from the App Store). 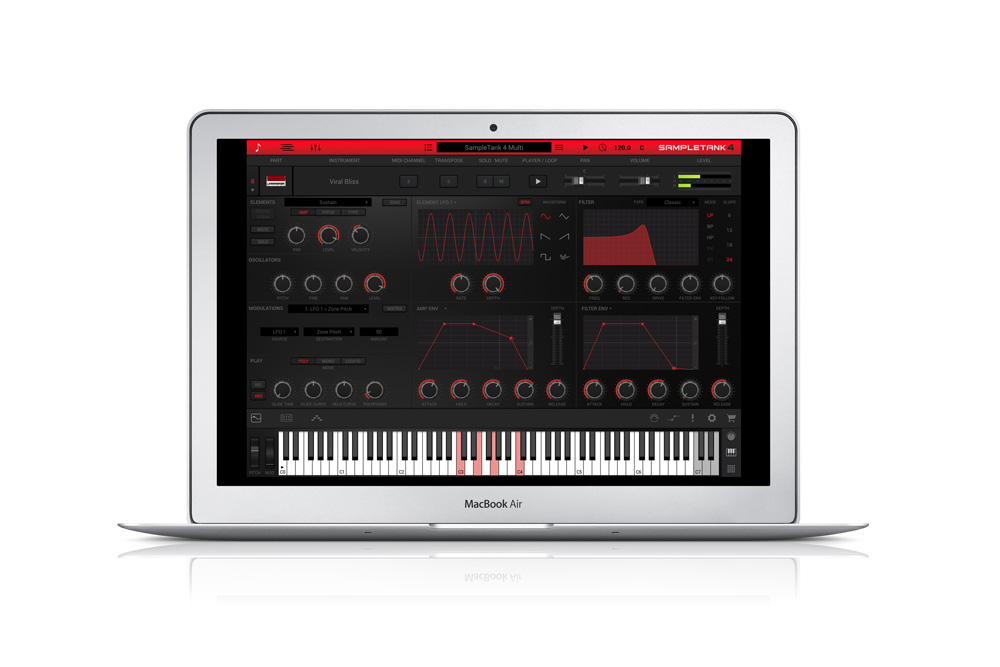 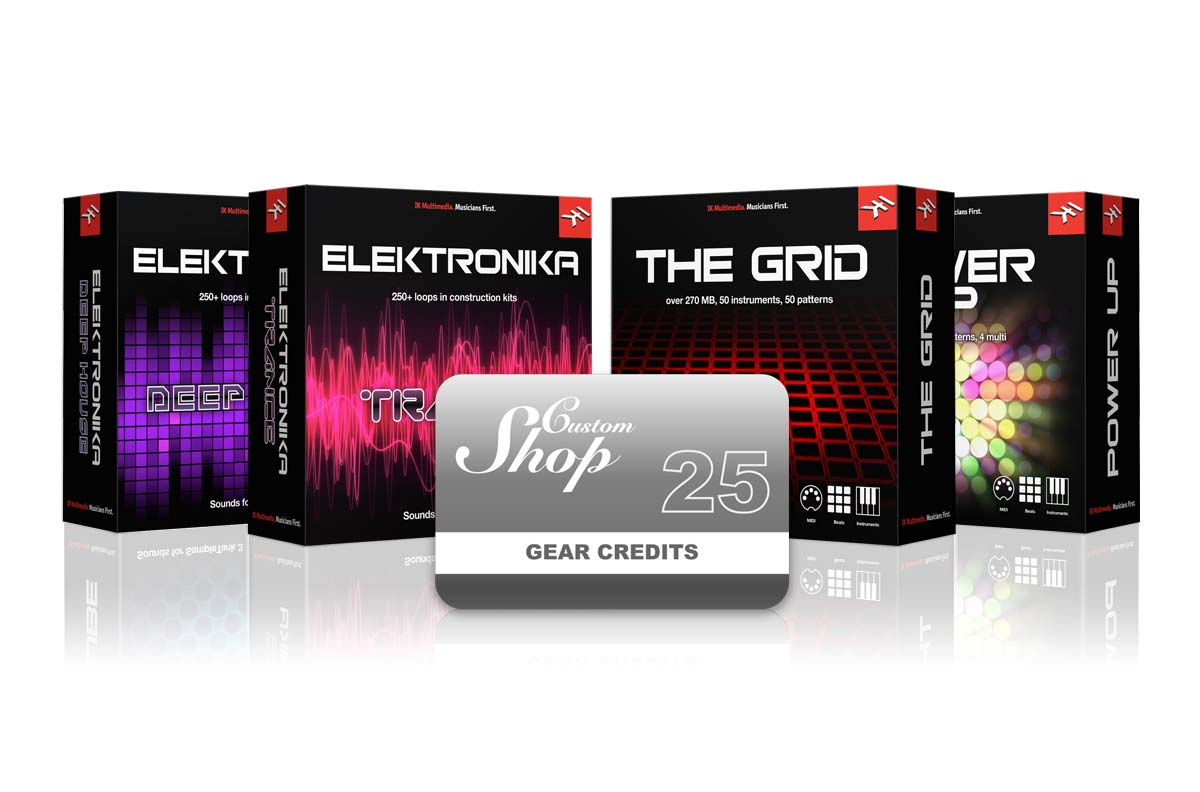 SampleTank 4 SE the Mac/PC sample workstation, available both as a stand-alone and as a plug-in for most popular DAW software (including GarageBand, Logic, Pro Tools, Cubase, Live, Sonar and more) with 30 GB of samples in every instruments category (to be downloaded from the IK Multimedia online User Area). 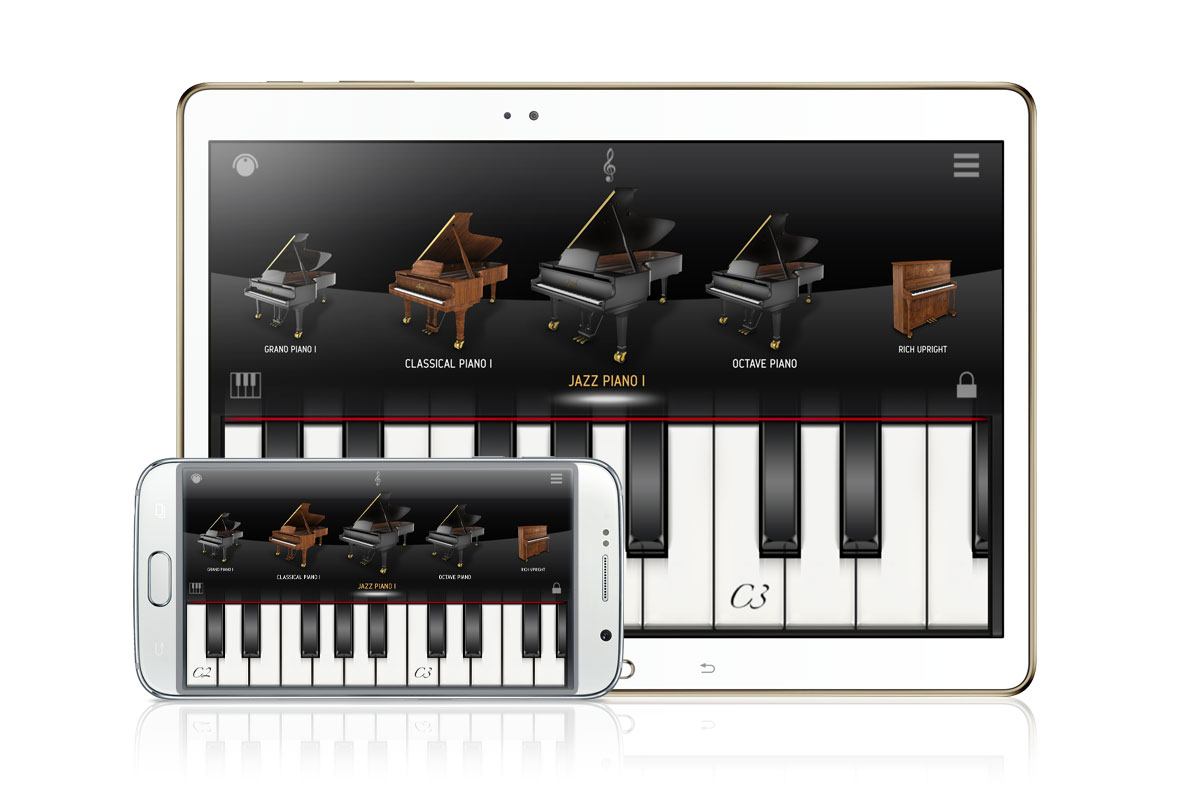 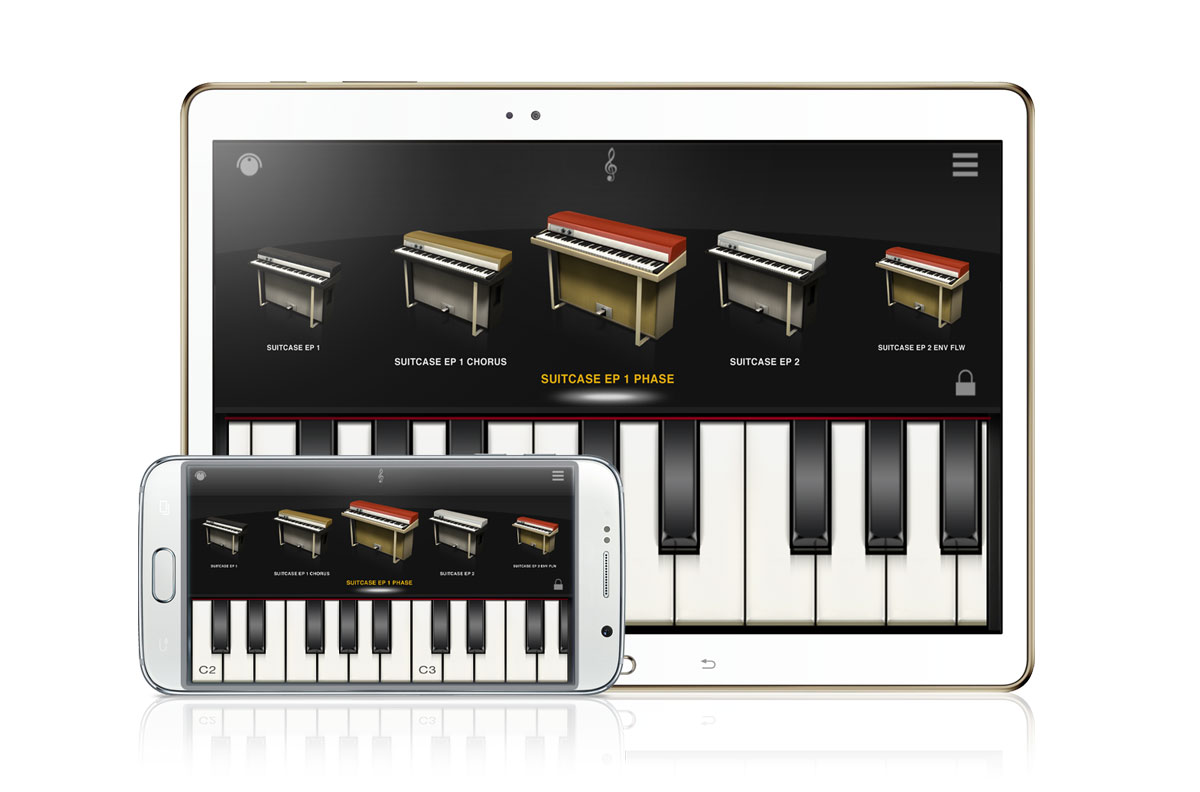 **For monitoring via headphones/monitors, requires use of Apple’s iPhone Lightning Dock, as it provides a lightning port and a 1/8″ headphone jack.

Compatible with any device running Android 5.0 or later.